As of today, Apple’s privacy update App Tracking Transparency (ATT) is officially in effect. Apple says it’s seeking fairness with this policy, but these claims seem dubious at best and more about the business than protecting consumer privacy. 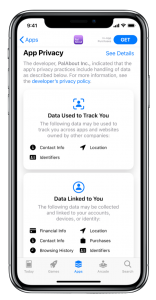 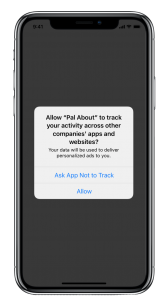 Without getting into the technical weeds, here’s a quick breakdown of what is changing with ATT.

These guidelines allow users to opt-in, rather than requiring them to opt-out, of being tracked for marketing and retargeting purposes.

All’s Fair in Love and Business

The official word from Apple is that ATT will foster fairness. But, is this really the case? Some companies are crying foul. For example, users can only download apps from the App Store. And Apple gets a whopping 30% commission on all downloads and requires users to use Apple Pay. And this fee isn’t applied evenly, downloads of Instacart, Uber, or Grubhub are exempt, making it seem like the tax is somewhat arbitrary.

Adding insult to injury, Apple is also rolling out suggested app ads, a space for an ad to appear on the main search page in the App Store search tab. This new feature will be live at the end of this month. Suggested apps will be displayed based on the user’s Apple ID. This seems to negate the idea of fairness and user privacy since the user’s ID gathers information such as interests, age, previous downloads, and more.

Well, it could be both. ATT prohibits third-party tracking unless the users consent to it, but it allows first-party tracking. And App Store Search Ads are considered first-party since Apple owns the App Store. Not surprisingly, Apple wrote the ATT rules to benefit their business interests, or at the very least, ensure that they were not impacted.

Business strategy? Probably. Ethical imperative? We’re not so sure. These changes make it difficult, but not impossible, to target ads. And while these new features, arguably, empower users, they also make it more difficult for Apple’s competitors to profit from their operating system. They appear to be building a fortress around iOS, camouflaged by a concern for privacy, and preventing third parties from monetizing on iOS.

In the long run, though, Apple’s motives are immaterial to what is going on in the real world. Digital marketers will need to refocus their marketing efforts to adapt to this challenge to personalized advertising. Digital advertisers have become extremely skilled at matching users to items they’d like to purchase. This development is likely not to decrease the amount of ads consumers see but reduce the usefulness of the ads to them.

There’s no doubt that Apple privileges its own network with ATT. For larger companies, this may not be an issue, but for small-to-mid-size companies with more limited budgets, it could become a challenge.

And Now for the Multi-Million Dollar Question

Facebook’s Mark Zuckerberg has criticized the App Tracking Transparency feature as more about business than privacy. He suggests that small businesses will not be able to reach customers with targeted ads. It’s hard to say that this supposition is wrong but consider the source. Since Facebook stands to lose conversion detail once users are no longer logged into Facebook’s family of apps, off-property conversion and remarketing capabilities will be impacted.

However, Facebook announced on Wednesday that it was making changes to its advertising tools in advance of ATT implementation. These changes would limit the ways in which target audiences can be chosen and how the success of a campaign will be measured.

When ATT goes into effect, Google will no longer use information affected by iOS 14 ATT for their iOS apps, including IDFA, used for advertising purposes. Google app on iOS will not display the data usage prompt.

So, how does ATT impact Facebook and Google advertising?

File This Under Everything Old Is New Again

It’s all about the creative, as creative once again rules the Internet. Digital advertising will have to be more creative and innovative. But this is just part of a more significant trend, and privacy and data sharing regulations are tightened across the board. Creative is getting more notice than ever before. Creative stops thumbs and catches eyes. And gets clicks. Apple’s ATT may just be a dress rehearsal for future restrictions and with a Google cookie-less future looming, it’s best to be prepared.

In fact, we’ve seen that 50% of performance marketing success in 2020 can be attributed to creative, and this percentage will increase in the coming years. Good marketing will feature good creative, great marketing will put creative first. It will be less intrusive and personalized to its audience.

The right creative will draw people in, engage their emotions, and connect products and brands with their audience. All in 15 seconds or less. It’s a heavy lift, but the right creative can do it. Creative leads consumers through the brand awareness and engagement phase to conversion. Without a strong front-facing creative, there are fewer opportunities for conversions.

How will the third-party ecosystem survive without targeting and remarketing? Is ATT an existential threat to all advertisers? That remains to be seen. It’s an old saying, but a true one: the only constant is change. And never more so in the future of digital advertising.

At Lamark, creative is kind of our thing, so we know we’re up to the task. If you’re looking for a creative strategy for your brand that takes into consideration Apple’s iOS 14 update, contact us to discuss how we can help unlock your potential. Let’s get started today.