As tech companies have come under increasing scrutiny over everything from data mining to harmful apps to security breaches, many of the big tech firms are scrambling to find new ways to reassure their customers that the products in their hands aren’t recording their words, actions, and keystrokes and reporting them back to app developers and hardware manufacturers.

Last month, Google unveiled the Pixel 6, which Google claims is the safest Pixel yet. At the same time, the new Security Hub app became available to Google Play, offering several simplified and enhanced security features that are currently available on Pixel 6 and Pixel 6 Pro.

How the New Security Hub Protects You

We took a look at some of the new security features available with the Pixel 6 OS.

Before this update, if you’ve owned a Pixel or another type of smartphone, you may have experienced the frustration of trying to better secure your privacy by clicking through the maze of options in your phone settings.

Of course, it’s possible to fully secure your smartphone if you have proper guidance and several hours to run down each potential security issue. It usually involves at least penetrating down through two or three menus in order to toggle an option. You can repeat this for each app or turn off a feature like “location” for all apps, which will render Uber, Postmates, and Maps useless until you go back in and turn them on. Google has attempted to end all of this heel-kicking by placing your privacy settings in one centralized screen: the Security Hub.

The Security Hub will alert you when it sees a potential security issue by placing a yellow or red exclamation mark next to the respective category. If all is well, a green checkmark will appear. There is also a larger circle at the top, which will provide one of these four statuses to let you know whether your security is sound or needs improvement: 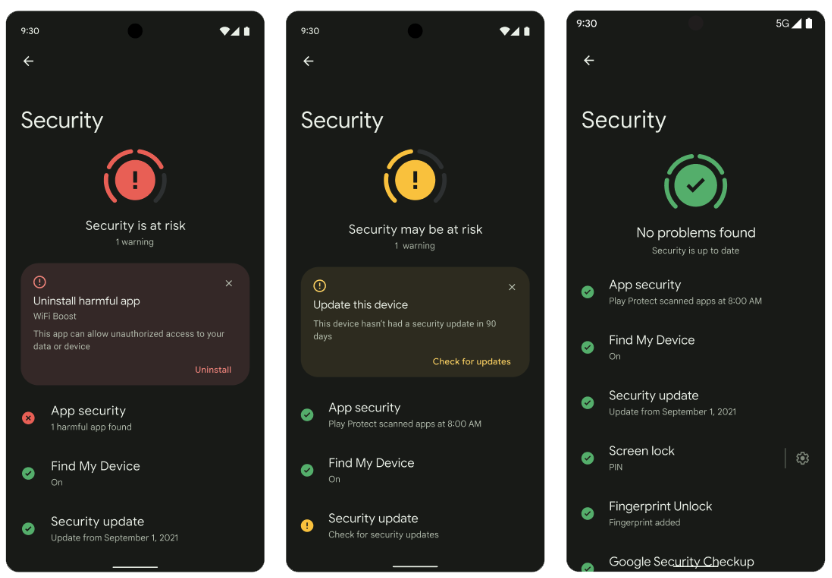 Of course, you’re under no obligation to do anything at all about security risks, but now you’ll be aware that they exist and can make adjustments consistent with your comfort level.

The new operating system will alert you when an app uses your microphone or camera at the top of the screen. If you don’t want to allow it to use your mic or cam, you can toggle them off.

The Privacy Dashboard will show you which apps have accessed your location, cam, and mic in the past 24 hours. If an app is accessing your data against your wishes, the dashboard will provide you with pathways to disable the permissions for those apps.

Is the Security Hub Coming to Other Android Phones?

For now, if you have a Pixel 6 or Pixel 6 Pro, the Security Hub is already installed. 9to5google.com has reported that the Security Hub has appeared on some Pixel 5s and Pixel 5as after they loaded it from Google Play. This indicates that the new privacy dashboard may be available on other Android devices, but no one is sure when, and so far, Google isn’t telling us.

A Definitive Path to Omnichannel Success